Daron Acemoglu, MIT: «Nowadays, in most countries, the most extractive elite is the politicians themselves» 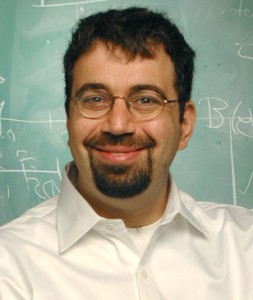 Daron Acemoglu is one of the most influential and acclaimed economists of his generation. Winner of the John Bates Clark Medal, his academic works have broadened our understanding of the role of institutions in economic development. After years of scholarly focus, he has summarized many of his findings in a very accessible (and self-recommending!) book for the general public. “The Failure of Nations”, written with his long-time coauthor James Robinson, argues that the ultimate cause for economic success or failure is rooted within each countries’ institutions, and that understanding how those institutions evolve is crucial for development. Starting from the difference between economic and political institutions, the authors argue that these institutions can be «inclusive» -designed with the purpose of benefiting all the population- or «extractive» -worried about extracting rents and maintaining power-, and that a struggle exists between both types of institutions. In this interview, we will discuss both his recent work and also the key problem of innovation in modern countries.

:: After years of intense focus on pure academic work, you have written an important book aimed at the general public. Which are the reasons behind this change?

James and I felt it was time for us to try to introduce a broader public to the ideas we and others have been working on. Though the book is intended for a general audience, we have learned a lot from writing it. Academic research often focuses on narrowly defined questions rather than on the general framework and on how different pieces fit together. Instead, writing a book like this forces you to ensure that the entire framework makes sense. This process has been very rewarding for us. We started thinking about this book several years ago, but then quickly realized that there were many pieces we did not understand, and this led to a lot more academic research in the intervening years, which has greatly contributed to the book and our general framework.

:: Do you believe –as Samuelson famously stated- that it doesn’t matter who writes the laws as long as you can write the economics textbooks? Do you think popular books can shape economic policy or, at least, affect the beliefs of the population?

No, unfortunately not. Of course, beliefs are very important, but we argue in the book that it’s difficult to understand the broad outlines of history by some people having the wrong models of the world and some people having the right ones. That being said, an incorrect understanding of economics and politics is naturally damaging. It’s damaging for leaders and their advisers, which is what the media focuses on. But I think it’s also damaging if the population has the wrong model, because then you can be misled more easily by their leaders. For example, in Latin America, people often blame the market or capitalism for their poverty, and this brings to power populists, as in Argentina or Venezuela, who then do more damage with their corruption and their politically-motivated economic policies. Instead of the market per se, the problem in Latin America in the first place is an economy dominated by elites, or what we would call extractive institutions. If the population fully understood this, populism and the control of traditional elites would not be able to do so much damage to the livelihood of millions. 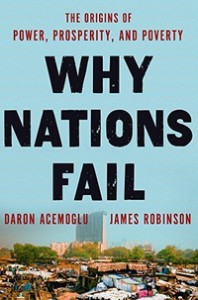 :: Some analysts think that many developed countries have been moving towards a light form of “crony capitalism”, in which key institutions have been captured by the main political parties. Do you agree with it or is it just some sort perception bias? In case yes, is it a recent pattern? Can a fully developed country jump from a stable equilibrium into one with more “extractive” institutions?

Yes, I think there is quite a bit of this. If you want to understand extractive institutions in 19th-century Europe or 20th-century Latin America, you have to talk of traditional elites, and their grip on power. But nowadays in most countries, the most extractive elite is the politicians themselves. Think of Greece. You cannot understand the last three decades without understanding corrupt political system. But the same is true even for the United States. The US political system has become dominated by the political elite and the lobbying industry funneling money to them. We are seeing the costs of this at this moment.

But I don’t think such things happen overnight and that a society jumps from inclusive extractive institutions all at once. It’s typically a process. That’s why there is often room for the population at large to become politically active and intervene. The hope in the United States, for example, is that this will happen at some point, but of course this is a slow process, too.

:: Perhaps this is the perception behind recent protest movements around the world. Which are the dynamics here? Who has the power to enforce the “checks and balances” if key institutions get captured by political parties?

That’s the crucial question. Who has the power to check and control politicians. Americans sometimes think it’s the Constitution. But that’s wrong. The Constitution is nothing but words on paper. It will restrain politicians only if it’s enforced. Sometimes other politicians will find it in their interest to do such enforcement, but we cannot always pin hopes on politician’s just checking each other. So there is no other alternative. Politics cannot just be left to politicians; otherwise you get corruption and a different form of oligarchy.

In the book we argue that in general whenever a country has some degree of inclusive economic institutions but extractive political institutions, there is a tension. One or the other will have to go, ultimately. Either there will be political reform, providing greater security and a more level playing field for the economy, or the elites, which are still unchecked, will sooner or later find it in their interest to tilt the playing field further for their benefit. In South Korea, for example, the authoritarian regimes of the 1960s and 70s finally made way to more inclusive political institutions. One might hope the same for China. But the problem is that the Chinese Communist Party has a total domination over society at the moment, making the process of reform particularly difficult. Consequently, major political reforms look unlikely in the near future.

:: You argue that innovation can only happen when agents cannot block change. But once a country is open enough to accept “creative destruction”, which is the role of (a) market size, (b) human capital and (c) the design of intellectual property system? How would you order those three factors in importance?

I agree very much with the way you put the question. First you have to ensure that the elites or other groups opposed to innovation cannot block it. Then you have to wonder about other determinants of it. The three you have listed are the most important ones. Market size is key. Profits motivate entrepreneurs, and market size determines profitability. So I would put that first. Of course, intellectual property rights are very important too, because without them innovation will not bear fruit. But often, secrecy and other methods can partially compensate for insecure intellectual property rights. Human capital is also important; you definitely need people who will be able to implement and operate new technologies. But even if the population has low education, this doesn’t stop innovation. For example, innovation can be directed at technologies that substitute for skills rather than complementing them. Because technology is generally very flexible, it can overcome many roadblocks. The two that are most difficult to overcome are the blocking by elites through the political process and lack of market size. 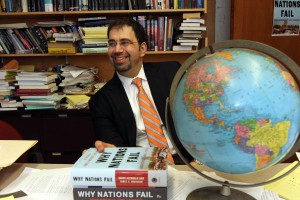 :: What do you think about the pace of the “technology frontier”? Do you think it is accelerating or slowing down? Do you think catch-up growth can quickly bring prosperity to Spain once we clear our financial and debt woes?

I don’t think the pace of technological change is much slower or much faster than before. Some people think we live in the age of technology revolutions, but those of the early 20th century were equally as transformative (and some people argue the opposite, that we are running out of new technologies, and this perspective also seems misplaced to me). As long as the political process does not block technological change, I do not fear a major slowdown in technological progress.

This is of course good news for everybody, particularly for countries such as Spain. Spain has grown rapidly since World War II by importing and using technologies developed elsewhere. This process can still continue to increase living standards in Spain even further. But the current crisis must be dealt with first. I think dealing with the financial problems is first-order. But the labor market is also problematic. Unless there is job creation, new technologies will not penetrate society and they will not be profitable. The Spanish labor market must be the most sclerotic and anemic one in Europe at the moment. Dealing with this is as much of a priority as dealing with the banks.

:: What do you think about the “growth agenda” that the new elected president of France wants to promote? How can a country like Spain achieve a minimum rate of growth in the turmoil of a financial and debt crisis?

I must be honest. I don’t understand what he means by the growth agenda. Does it mean an end to austerity? If so, why not say so? And if so, how do you ensure fiscal discipline moving forward? Does it mean Germany has to bankroll deficit to other countries? If so, it will never be acceptable to the German voters unless there is real political union, which France and the rest of Europe will not accept. I also think it’s totally disingenuous. Growth agenda and further reductions in the French retirement age? It’s totally irresponsible.

Of course, growth is the priority. Nothing else matters as much economically (provided that you don’t damage the environment, of course!). If you can ensure growth, deficits will disappear, and we will think back of this episode as a blip on the road. But the reforms are necessary to ensure growth. Macroeconomically, I think, it would have been very useful to restructure the debts of Greece, Italy, Ireland, Spain and Portugal very early on and very decisively, so as to avoid debt overhang, which is the real problem (much more than the austerity programs). This is probably still the right solution. A realistic plan of serious debt restructuring together with credible fiscal discipline moving forward. Of course, this would mean losses for international banks, and that’s why this is a politically difficult step.

Tyler Cowen: “At the moment, Spain is not in charge of its destiny”