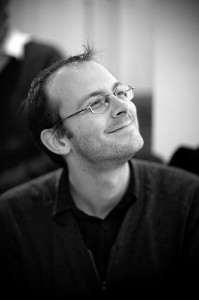 Tim Harford is economics leader writer for the Financial Times and writes the “Undercover Economist” columns on Saturdays. He first joined the FT as Peter Martin Fellow in 2003 and after a spell at the World Bank in Washington DC he rejoined the FT’s leader writing team in 2006. As presented at TED, Tim Harford looks at familiar situations in unfamiliar ways and explains the fundamental principles of the modern economy. He illuminates them with clear writing and a variety of examples borrowed from daily life.

His new book, Adapt: Why Success Always Starts With Failure, argues that the world has become far too unpredictable and complex for today’s challenges to be tackled with ready-made solutions and expert opinions. Instead, Harford suggests, we need to learn to embrace failure and to constantly adapt, to improvise rather than plan, to work from the bottom up rather than the top down. He also presents the BBC radio series More or Less, a rare broadcast program devoted, as he says, to «the powerful, sometimes beautiful, often abused but ever ubiquitous world of numbers». He says: «I’d like to see many more complex problems approached with a willingness to experiment»

:: First of all, we would like to ask you about the evolution of your work. With Adapt you evolved from an “economics-in-my-cup-of-coffee” writer to tackling some of the most important problems of modern society. What led you to that?

I have always been interested in the big issues. I wrote about development in Africa and China in my first book; I married an environmentalist and have long been interested in problems such as climate change; I used to work for the World Bank. But of course with the financial crisis I just had the sense that one simply cannot be an economist and only write about cups of coffee right now.

Of course once I decided to write about the big issues there was still the question of what to say. My ideas evolved gradually and there was a lot of trial and error, which is appropriate given that trial and error is the subject of the book.

:: Do you believe, as Samuelson did, that “he who writes the economics textbooks” will shape a country even more than the Government?

Yes, that is probably true. Although there are many ongoing debates in economics, the subject is more rigidly defined that it should be. We should be more open to different methods, for instance. So perhaps the real power lies not with those who write the textbooks but those who edit the academic journals.

:: You argue that the innovation pace can be slowing down because of growing complexity. Are we just talking about a second derivative or do you think it’s already having an impact in growth today? What do you think of the “low hanging fruit / great stagnation” hypothesis?

I think the great stagnation hypothesis is quite plausible but innovation is by its nature unpredictable, so we will have to see. People are also distracted by the financial crisis: twelve years ago Robert Gordon was talking about a productivity slowdown and I told everyone I met about that work, but nobody cared because in the short term the economy was okay. Now the economy is doing terribly, people take Robert Gordon and other “stagnationists” seriously, but the truth is that we haven’t learned new information about the rate of innovation. We’ve just become gloomy for other reasons. (Good reasons!)

I think there are three pieces of evidence. One is anecdotal: it’s to observe that in major areas of huge importance to the economy, such as nuclear and renewable energy, automotive transport, air transport and new blockbuster drugs, we seem to be making slow progress. Computers, software and mobile phones are great, of course, but that is only one slice of the economy.

The second is Robert Gordon’s discovery of a slowdown in productivity in the US since the early 1970s.

The third evidence is based on patents and academic citations. The modern patent or journal article is now produced by a larger team which contains older scientists with narrow fields of specialism. It just seems to be a much more complex team effort to produce a new idea.

Now I am an optimist, deep down. I am not so interested in whether innovation is slower or faster than in the past. I am more interested in how to promote it, which is one of the things I discuss in the book.

:: What has happened with the “frontier of technology” during the crisis? One of our hopes for Spain is that the frontier has gone so far away that the catch-up process will save us in the medium-run. Will the catch-up processes of the future be as rapid as those of the 20th century?

Nobody knows. I hope catch-up can be quite rapid. The concern for Spain is how much of the economy was driven by capital investment that may now be useless – such as houses with nobody to live in them. 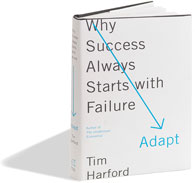 :: You seem to agree with Gary Hamel about the firms’ problem with adaptation. How can big, established firms, become more flexible, agile and creative?

Big firms have advantages too: because they are large they can afford to try many small experiments, and they can also share the results of successful experiments across a large number of people. It is particularly easy to do this with incremental, iterative tests of (for instance) pricing, product placement or website design. But in principle it’s also possible to do it with in-house think tanks and innovation labs.

In practice there are two problems: large firms are large because they have been successful in the past, and that naturally makes them suspicious of new ideas; large firms have large hierarchies, and that means it can be very hard for feedback (good news or bad news) to reach decision makers.

The answer? No easy answers, but I suggest: make experiments a routine part of business.

:: How would you advice a young entrepreneur, in three small sentences, about his “adaptability”?

Look for “small bets” – experiments you can do that will not hurt too much if you fail. Ask people for advice and feedback, and listen to them without necessarily agreeing with everything – and make sure it is a variety of people with different views. Ask yourself not only “what would we gain if this succeeded” but also “what would we learn if this failed”?

:: Spain is notoriously known for its negative attitude towards risk and failure. Is there something we can actively do to change it or are we condemned to a decades-long change process of our culture? How do you perceive the “Spain Trademark” from the UK?

When I think of Spain of course I think of consumer-facing success stories such as Santander, Zara and of course Spanish food. I also think of big expensive infrastructure projects. I do not know whether either of these perceptions are accurate!

As for cultural attitudes to risk, I think a lot of this is about how “risk” and “failure” is framed. Nobody likes a genuine failure, but in Silicon Valley people do not conclude that someone who set up a business and went bankrupt is “a failure”. So this is partly about how we choose to define these words and these things can change.

Japan and Korea are often perceived as risk-averse cultures where fear of losing face makes people very conservative. But the psychologist Carol Dweck finds that Asian children are very happy to experiment and fail at the blackboard in the school-room. Things are rarely as simple as our stereotypes – including our stereotypes of ourselves.

:: The same can be said about how our politicians shape public policy. We are so reluctant to admit we just don’t know some things that, instead of a “trial and error approach”, we seem to jump from one big error into another. Is there something we can do about it? Related to the previous question, do you think Internet and the blogosphere are having some kind of positive influence in this problems?

As with many things, there are positives and negatives. I do think the internet is making it easier for a “fact checking movement”, where if politicians mis-use evidence or statistics, they are discovered and corrected. It is also easier to share evidence on policy – for instance, the Campbell Collaboration is an international organization designed to share international evidence about the results of experiments in education, prison reform, and so on.

But unfortunately our reluctance to experiment and risk small errors to learn is quite deep in human nature. I do not think it will be easily corrected by the internet or anything else.

:: As we did in our last interview, we would love to know about the subject of your following book!

Good question. I am now working on a sequel to the Undercover Economist called “How to Run – or Ruin – an Economy”. It’s about the big macroeconomic questions – unemployment, inflation, fiscal stimulus – but I hope that it will help people understand these issues but also see them in a very new way.

One last question. Regarding our debt crisis, which one of these solutions would you choose were you the President of Spain?

a) Leave the Euro, depreciate

b) Ask for a bailout, accept hard conditions

I am always reluctant to tell other people what to do – especially when it is not even my country. It’s why I would never survive in the Bundesbank…

But seriously, I think that (b) offers opportunities to Mr Rajoy to push through tough structural reforms (for instance, labour market reforms) while blaming the European Union. But Spain must be careful about hard conditions on the deficit: trying to cut spending too quickly is damaging.

My answer then, is (b), as long as Mr Rajoy can be clever about what the “hard conditions” actually are.

1.- Guy Kawasaki: “If Israel, with 5 million people and lots of sand can do it, Spain can do it”

2.- Daron Acemoglu, MIT: “Nowadays, in most countries, the most extractive elite is the politicians themselves”

5.- Martin Zwilling: “Success is more a function of capitalizing on new opportunities than riding the waves of the economy”

Daron Acemoglu, MIT: «Nowadays, in most countries, the most extractive elite is the politicians themselves»